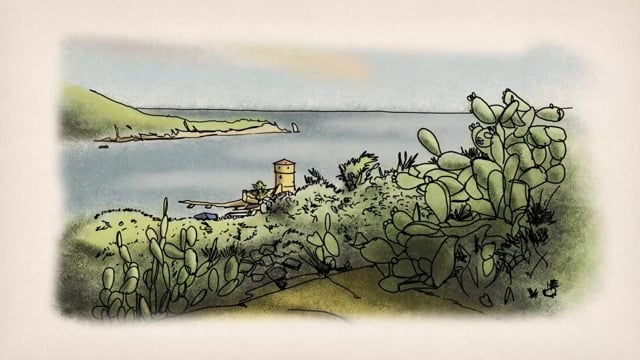 Around 2000 an exchange student from Florence named Lisa Paclet came to MCAD for a semester.  (She works and lives in Paris now after studying at Gobelin.)  I got to know Lisa and her parents Elena and Philippe.  In 2011, Hilde and I visited them in Florence and then went on to Giglio with them, where they have been spending their June vacations as a family for 25 years.

The little town of Campese on Giglio immediately reminded me of the resort in Jacques Tati’s “Les Vacances du M. Hulot.”  I know a lot of animators who are attracted to Tati’s films.  There’s something about the stylization of his character movement and use of post-production sound design that makes his films akin to animation.  “Giglio,” as the conclusion of the “water vacation” trilogy, shares the characteristics of “Desert Dive-Inn” (1995) and “A Plan” (2004):  no dialogue, purely visual storytelling, no non-diegetic music and a slightly melancholic detachment in the film’s point of view.

I went back to the island two years later for about 10 days with a sketchbook and an audio field recorder.  I sketched people and backgrounds, devised vignettes, observed the mannerisms of the people on the island and recorded a lot of ambient sound.  All of this became the raw material out of which the film organically emerged.  I also talked to and hung out with Elena Brizio, Lisa’s mother, who loves Giglio and knows a lot of the locals and history of the place.  Also, through Elena, I met Gina Magnani who lives on Giglio.  I wish that I had had more resources to include some of the stories that they told me, but I was really restricted to working with just a few characters and settings.  And it felt more appropriate actually to present the material from a point of detachment with the “sketchbook” character as my intermediary in the film.

The animation developed very naturally, again without plan or storyboard of any kind.  When I ran out of money and patience with the process, I took all the footage I had generated and started to find an order and organization for it in After Effects.  I’d always conceived of the film occurring in the pages of a sketchbook, but that metaphor allowed me to condense 15 minutes of linear footage down to the 10 minute running time, by using the idea of multiple panels within a single page.

I do my own sound design for my films and really like this stage of the process.  Just at the point when you’re really tired of working with the film, you add sound and it comes to life again.  With Giglio, almost all of the sound was recorded on the island (with the exception of a few foley details).  There was something magical about adding the atmospheric recording of a location to my animated version of it to lend credibility, weight, reality and even poetry to the film.  There are very few instances of me working directly off of an analysis of a sound.  The woman in the “pesce fresco” truck is one example of animating directly to the sound.  In general, I listened a lot to the sound as I was drawing, so it pervaded perhaps the feeling of the animation.

There were certain aspects of the sound that Gina and Elena helped me with.  Since I don’t speak Italian I asked them to make sure I hadn’t inadvertently recorded any mean-spirited local gossip.  I also asked them to identify the song you hear at the end of the film.  I’d recorded it on a festival day on the island, along with a couple of other songs.  Gina immediately knew who was singing it and who had composed the song.  It’s called “Sono Gigliese e Canto” composed by Cecchino Aldi who was a stone mason and farmer on the island.  Chancing across this performance of the song with my recorder was a bit of good fortune.

Tom Schroeder's wonderful 'Isola del Giglio' shares an atmosphere with other animated travelogues such as 'Madagascar, A Journey Diary' and 'Journey to Cape Verde', in that it evokes a time and place through animated sketches depicted as if in a book. Like the aforementioned films, narrative is put aside in favour of mood and an encapsulation of one day on Isola del Giglio. Considerably different from his anecdotal films, 'Isola del Giglio' also marks a progression in Schroeder's visual style, which still favours the attractively bold but now has a far more painterly look and increased fluidity of animation. Like all the best travelogues, 'Isola del Giglio' takes you away from your own life and places you squarely in its own destination, which is depicted with a great attention to details, both visual and aural, and great affection for the characters of the island. A joy from beginning to end, 'Isola del Giglio' is a relaxing watch to completely lose yourself in.

Minneapolis does not always ring the loudest of bells when the world’s animation hotspots are being discussed. But it is home to Tom Schroeder who for nearly 20 years has been producing hand drawn animated films that have performed extremely well on the international festival circuit. If any independent animator can claim a ‘break-through’ film, Schroeder’s would have been the white-on-black mini-epic Bike Ride produced back in 2000. Relatively simple in style, utterly personal and (apparently) biographical in nature it introduced a filmmaker who brought a gentle, knowing eye to whatever story he decided to run with. Over the years the techniques became more sophisticated and the stories far more complex but always that sense of a filmmaker with an empathetic eye and a real care for his characters shone through in every film he made.